Protection to the east, north and west was provided by Mugdock Loch which was much greater in size in the Middle Ages than it is today. A ridge of volcanic rock running from east to west just south of the Castle kept the water level high. This provided the Castle with a natural defence on three sides making it difficult for attackers to mount an assault. When this was removed by blasting in Victorian times, the level dropped by two metres.

The Castle was the administrative centre for the lands of Mugdock. No one knows how old it is but the Castle is first mentioned in a vellum document dated 24th August 1372. This was an agreement between Sir Patrick Graham and Angus Hawinroyss over the ownership of land at Boclair and was signed at Mugdock. As built, the Castle was four-sided. Its four towers were connected by a curtain wall. Visitors would have entered from the south through a grooved portcullis gate. Inside was a courtyard, a jail and a courthouse with accommodation for visiting nobility. A Great Hall was added in the 15th Century and other minor changes were made following the introduction of gunpowder including the provision of gun-loops. Mugdock was attacked twice during the reign of King Charles I (1625-1649). The first occasion was in 1641, under the instructions of Parliament when James Graham the “Great Marquis” was a political prisoner in Edinburgh Castle.

A second attack occurred in 1644, when a small force of Buchanans, acting on behalf of the Committee of Estates, inflicted serious damage. So bad was this that parts of the Castle and one of the towers were no longer habitable. In 1647, Mugdock passed into Campbell ownership but was purchased from them by the 2nd Marquis for 50,000 pounds Scots. In 1661, the Restoration Parliament ordered the Campbells to repay this sum. Around 1655, some of the rubble from the partially demolished tower was utilised to build a small two-storey house with crow-stepped gables. For some years, it was home to the 2nd Marquis of Montrose but was thought to be “a poor dwelling for a Marquis”.

The walled garden and summer-house between the Castle and the Loch were constructed around 1820 to 1830. At this time, other members of the family (the Grahams of Dougalston) stayed in the old house in the courtyard. At one time, the upper of the two terraces was laid out in formal flowerbeds and the lower terrace functioned as a grass tennis court. At the east end of the south wall are the remains of a small building which contained the water pump which provided the domestic water supply. The remains of the Castle orchard can still be seen to the west of the Castle which also had its own 9-hole golf course. The last green was located just outside the Castle’s main entrance.

In 1874, the Duke of Montrose granted antiquarian John Guthrie Smith a lease of the Castle. He had the house demolished in 1875 and replaced it with a large mansion house in the Scottish Baronial style. It was linked by a covered passageway to a room on the first floor of the Castle’s south-west tower. He also reconstructed the Mugdock Castle stables and built offices and a washhouse in the inner courtyard. The mansion was last occupied in 1948 and was demolished in 1967.


100 metres to the north of the south-west tower, at the edge of a steep bank, lies a ruin lies a stone ruin which is thought to date from the early-16th Century. Although popularly known as “The Chapel”, it is doubtful if this was used for religious purposes. To the north of the Chapel lies a tower with two arrow slits facing out over Mugdock Loch. It is thought that this may have been used as a latrine during the Middle Ages. 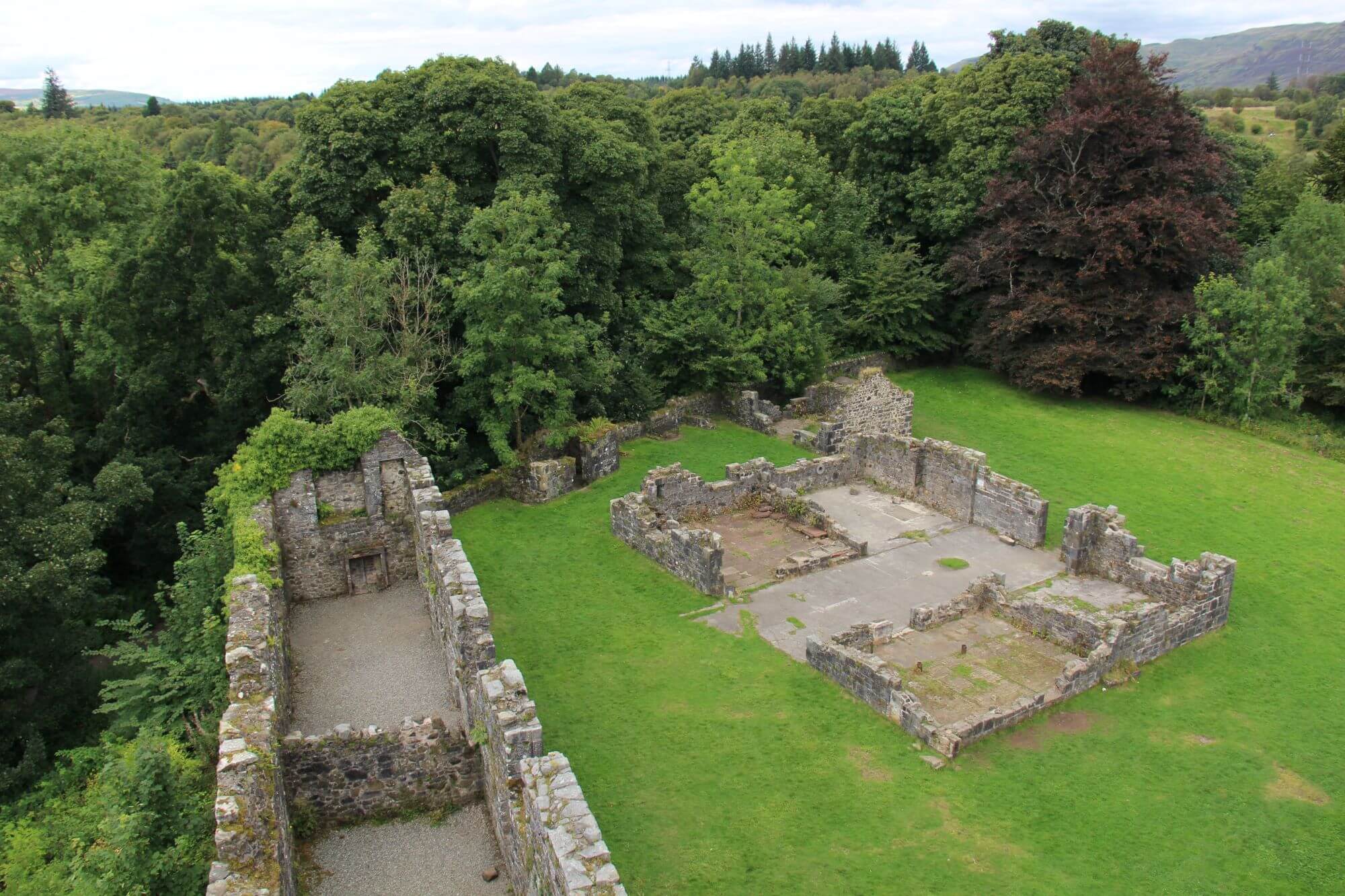 Moot Hill was thought to have been a hill of judgement during the Dark Ages and the later Mediaeval period. This meant that anyone convicted of a serious crime would be sentenced there after having been tried in the Courthall of Mugdock Castle. There is also a theory that the site was used by the freemen of the district as a kind of local parliament where legal matters were conducted and quarrels settled. At that time, Moot Hill was a tiny island in Mugdock Loch some 200 metres to the north of the Castle. Today, it is part of the surrounding countryside but few are aware of the ancient secrets it may conceal for Moot Hill is believed to have been the site of two crannogs one dating from the Bronze Age (1,800 – 800 BC), the other from the Iron Age (800 – 200 AD).

Crannogs were large loch dwellings built on circular, man-made islands. The bases were composed of large rocks surrounded by stout wooden posts which were driven into the bed of the loch. A timber platform was laid on top of this with a large, round, thatched house in the centre. The house would have been 15 metres across and divided into several compartments. A large clay hearth dominated the interior and there was a hole in the thatched roof to allow the smoke to escape. Outside was a wide, wooden platform for the inhabitants to walk on. A small jetty faced away from the loch side and could only be accessed by dug-out canoe. Some crannogs had a causeway which connected with the loch side. This ran in zigzag fashion just below the surface of the loch. The crannog dwellers would know well the direction the causeway took but not an attacker who, hopefully, would end up in the loch!

Information on the Park

Learning about and connecting to the natural world

These lands have many great stories to tell